Carbon emissions across Greater Manchester’s public buildings reduced by over 7,000 tonnes per year

You are here: Home > Carbon emissions across Greater Manchester’s public buildings reduced by over 7,000 tonnes per year 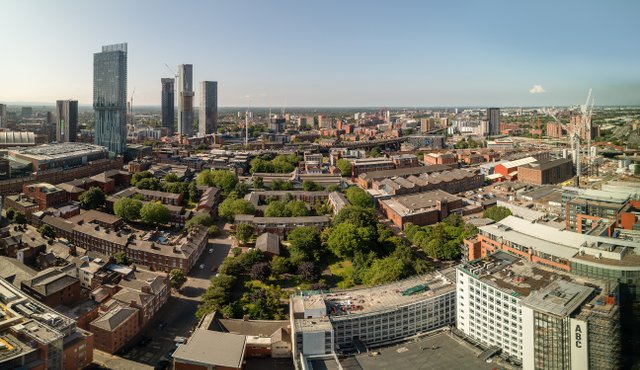 Over 200 public sector buildings across Greater Manchester have seen their annual carbon emissions significantly reduced thanks to retrofit improvements making them greener and more energy efficient.

Greater Manchester’s public buildings are now producing over 7,000 tonnes less CO2 equivalent per year, helping push the city-region towards its ambition of being carbon neutral by 2038, 12 years ahead of the national target.

Work carried out also means that the public estate has reduced its energy use by over 43 million kWh, saving over £2m across the city-region per year.

The improvements are a result of over £78m from Government’s Public Sector Decarbonisation Scheme (PSDS), funded by the Department for Business, Energy and Industrial Strategy and delivered by Salix Finance. The largest award from the scheme in England, the PSDS has supported energy efficiency upgrades to buildings and organisations in Greater Manchester including:

In total, the works are expected to have supported the creation or safeguarding of around 2,000 jobs throughout the city-region, fostering the green skills needed to continue cutting emissions as well as supporting the goals of Greater Manchester’s Five-Year Environment Plan.

Councillor Martyn Cox, GMCA lead for the Green City Region, Waste and Recycling, said: “In Greater Manchester, we’re serious about making the changes needed to reach our target of becoming a carbon neutral city region by 2038 and for our region to be a greener and fairer place for everyone.

“Reaching that target will require meaningful change from all of us. Retrofitting our public buildings is an important step in ensuring the buildings of Greater Manchester are producing as little carbon as possible. We hope that insight from the PSDS so far will go on to help us make further improvements and compel other owners in the city-region to make similar improvements to their own buildings.”

The PSDS is one of many initiatives helping to deliver the goals of Greater Manchester’s Five-Year Environment Plan. On 17 October 2022, the fifth annual Greater Manchester Green Summit will give more insight into other projects and help the city-region further accelerate action together, today. You can register for free tickets to the Green Summit here.