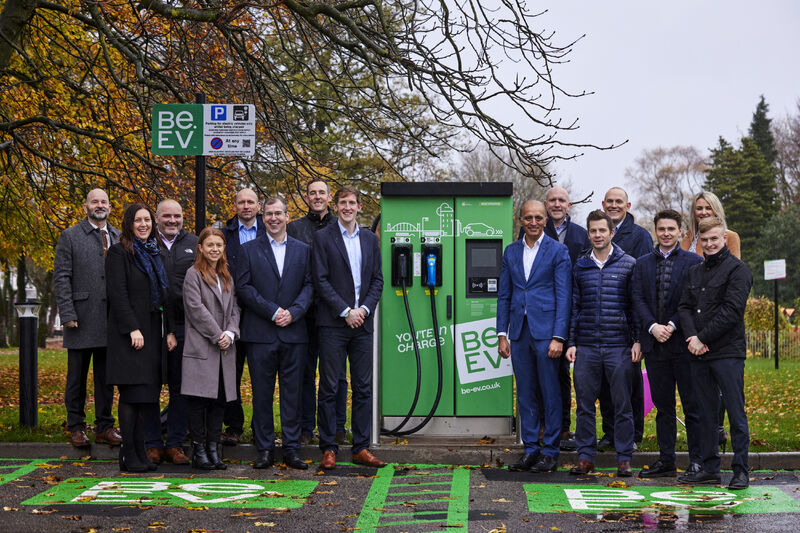 As statistics show the continuing regional inequality in access to electric vehicle charge points, Trafford Council has connected the first of a planned 100 new charging bays which will be the biggest local authority roll-out in Greater Manchester.

Delivered in partnership with Be.EV, the ambitious roll-out has been designed to ensure charging access is available for all residents in Trafford, not just those in affluent areas.

Up to 100 charging bays will be delivered by 2023, with no capital investment from the local authority (it has leased sites to Be.EV, which is responsible for the build and maintenance of the network).

The go-live of the first new sites, including car parks and local parks, comes as Department for Transport statistics show that the North West has the lowest level of public charge points per 100,000 population of any English region (32 per 100,0000 people) — far behind the South East (49), West Midlands (42) and London (122).

Chris Morris, Director of Transport, Highways and Environment at Trafford Borough Council, said: “The aim of this roll-out is to create dependable, fair access to public EV charging across the borough. We want to build the infrastructure that encourages everybody to go electric — even if they can’t charge at home.

“The team at Be.EV use street-level data to really drill into neighbourhoods and find the locations that make the biggest difference locally. Building bigger hubs that ensure there’s always a free space is part of that strategy.”

Be.EV CEO Asif Ghafoor said: “As significant landowners and as representatives of all their residents, councils and cities play an important role in ensuring a fast and fair delivery of green infrastructure.

“But, as Trafford Council has shown, they don’t have to do it all. We are delighted to have supported their team with our planning and data expertise and — crucially — with significant capital investment.”

Working collaboratively, the Be.EV and Trafford Council selected and prioritised locations of the new chargers according to where they are most needed (near houses without driveways, for example) and where they could be delivered quickly. On each shortlisted site, detailed site assessments ensured the space was used optimally, with accessible, well-lit bays and clever layouts.

There was also a public consultation, with feedback highlighting the demand for faster chargers in safe, well-lit locations.

The partnership model between Be.EV and Trafford Council is collaborative, flexible and non-exclusive, as well as fully-funded. All ongoing maintenance, back office, upgrades and further expansion of the network is the responsibility of Be.EV, who are also bringing in private landlords and businesses to host chargers and build a concentrated, unified network in the region.

Be.EV CEO Asif Ghafoor said: “The Trafford team have been really forward-thinking in their approach and together, I believe, we’re showing what’s possible. We need hundreds of thousands of public charge-points by 2030. If, like Trafford, all 300+ local authorities rolled out 100 bays in the next two years, that order of magnitude no longer looks out of reach.”

More about the Trafford roll-out can be found here.