You are here: Home > Nylon knickers to umbrellas – how a device made from recycled materials in Manchester is keeping our homes warm

A heat-saving device made from old underwear, carpets and seat belts could slash CO2 emissions – and family heating bills

Thermocill, which has been designed with support from the University of Manchester and the Henry Royce Institute, works by directing air from radiators up against windowpanes, creating a warm curtain in front of the glass to improve energy efficiency – reducing both the amount of cold air entering the home and warm air from leaking out through windows.

The device works through a retrofitted window board that redirects warm air emitted from domestic radiators to pass up and close to the glazing, effectively creating an “air wall”, with an invisible layer acting as an insulator to reduce the amount of cold air entering a house, alongside the amount of warm air being lost.

Made from 100% recycled nylon, taken from old items such as clothing, underwear, umbrellas, carpet waste and seat belts, Thermocill is completely waste-free, and can also be recycled at end of life.

The device could play a significant part in the home heating challenge – which according to a report published by World Wide Fund for Nature (WWF) in April 2020, make up 9.7% of the UK’s carbon footprint, which is higher than emissions from aviation.

Tested by independent researchers at the Salford Energy House, and verified by The Energy Savings Trust, Thermocill has the ability to heat up a standard three-bedroom house 19% faster, reduce energy usage by 8% and lower the risk of damp developing in the property.

The findings also estimate that a three-bedroom semi-detached house could save around 150kg of Co2 emissions and save approximately £93 per year in energy bills.

The company, which is based in Altrincham, Greater Manchester, has already signed an agreement with a council in the North West to initially install Thermocill in 2,000 homes, leading to a 300-tonne CO2 emissions saving, and stopping 16 tonnes of material going to landfill.

The idea for Thermocill started on a cold night at inventor and entrepreneur Keith Rimmer’s home – “I was sitting in the lounge and I was looking towards the window and noticed the vertical blinds moving. My friend asked ‘What’s up Keith?’ and I just blurted ‘I’ve got an idea!’, says Keith, who is Founder and CEO of the company.

“I could see the convection of warm air from the radiator was trying to get to the window but it couldn’t get there because of the width of the window board and the direction of the heat flow. I went to my car and got my digital thermometer and took some readings around the window area and within 10 minutes I had the idea for Thermocill firmly fixed in my head.” 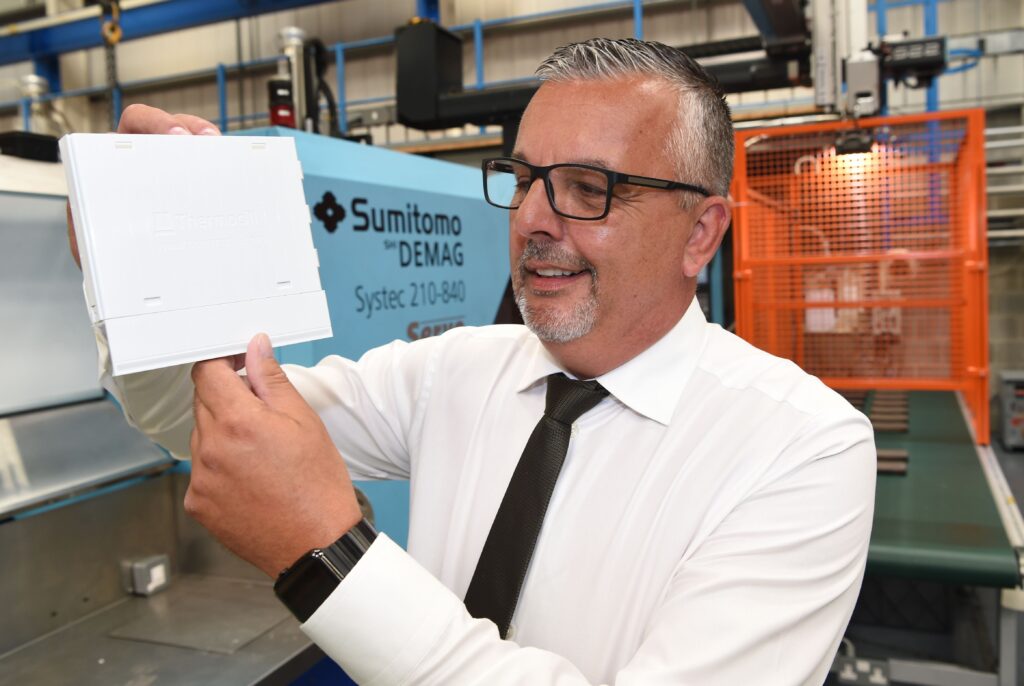 Over the past three years, the development of Thermocill has been supported by the Henry Royce Institute’s Sustainable Materials Innovation (SMI) Hub, with the development of a prototype by the Department of Mechanical, Aerospace and Civil Engineering (MACE) at The University of Manchester.

Keith adds: “Both The University of Manchester and the SMI Hub have played a key role in helping to support the development of Thermocill, from the initial idea and concept through to real-world application.

“Finding a sustainable material to make the product from has always been a critically important element, to maximise the positive environmental impact of Thermocill.

“With the first major production run taking place soon we’re at an exciting stage in this journey and it’s very exciting that together, we’ve developed a product that will have a positive impact on energy efficiency and fuel poverty very soon.”

Dr Amir Keshmiri, a Reader in Fluid Dynamics who led the project at MACE, said: “Thermocill is an innovative concept based on the fundamentals of fluid mechanics and heat transfer and our results have demonstrated the effectiveness of this device in changing the flow in the room and the thermal comfort.”

Nylon is a strong, stiff engineering plastic with outstanding bearing and wear properties – but the best way to get rid of unwanted nylon items is to recycle them, such as making Theromicill devices.

Professor Michael Shaver, SMI Hub Director and Professor of Polymer Chemistry at The University of Manchester, said: “Households are huge sources of carbon emissions so it’s important that innovative solutions are developed to help reduce their impact.

“We are proud to advise the company on the sustainability of their plastic choices for both current and future products.”

The company is also hoping to go beyond tackling waste and climate change, and has established The Thermocill Trust, which receives a percentage of profits from each sale of the product.

Funds raised for the trust will then be used to purchase energy-efficient modular housing and create low energy homes for homeless households, working with local councils and social housing organisations.

Find out more about Thermocill, how to order the device to save energy, and the science behind it, here.