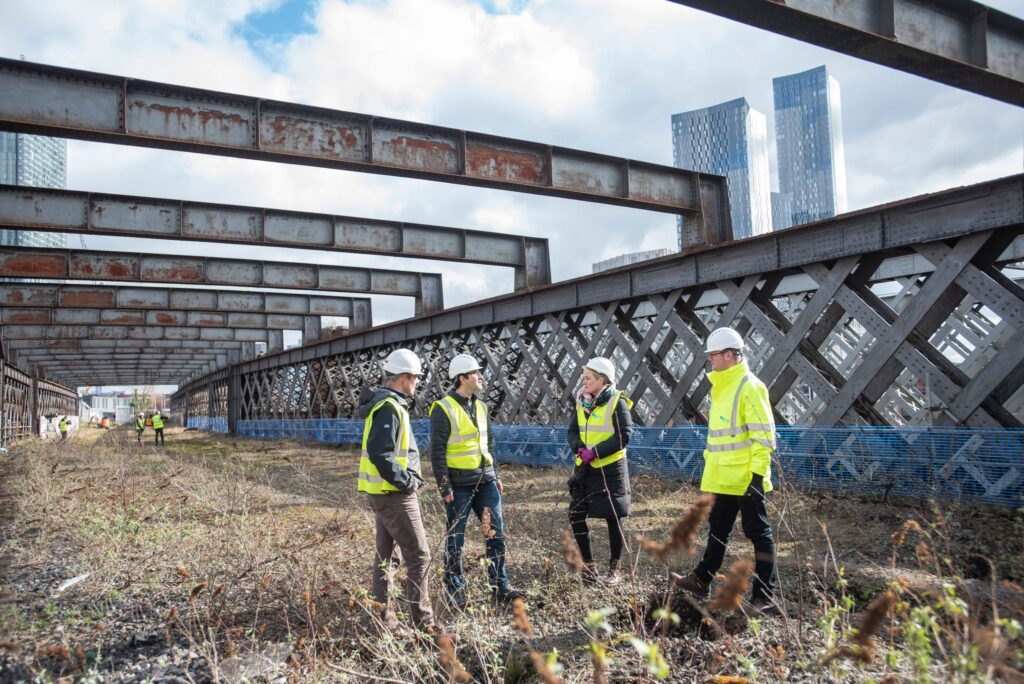 Plans to create a new urban sky park for Manchester to bring more green space and nature to the Castlefield area of the city are a step closer to reality with work about to get underway.

Due to open in July, the National Trust is aiming to turn the imposing 330 metre steel viaduct built in 1892 into a temporary park in the sky and create a meeting place to benefit people and nature that celebrates the industrial heritage of Castlefield.

Originally built to carry heavy rail traffic in and out of the Great Northern Warehouse, the station closed in 1969.  Since then, it has stood unused with National Highways undertaking essential repairs and regular maintenance to keep it safe.

The pilot phase of this project will see a green space created to stretch halfway across the elevation of the viaduct.  Trees, flowers, and shrubs will be planted to soften the hulking, grey steel work of the industrial structure to help attract wildlife.

Made possible thanks to working in collaboration with National Highways Historical Railways Estate Team, supported by Manchester City Council, Greater Manchester Combined Authority, Transport for Greater Manchester, the local community, businesses, and supporters the project will be open for 12 months.

During this time visitors will have the opportunity to not only explore part of the structure, but to find out more about the viaduct’s heritage, the city’s long relationship with plants and trees and can learn some urban gardening tips.

A section of the viaduct will be left untouched to provide a sense of how nature has reclaimed the space since the site was closed to the late 1960s. It will also have several new features including installations, a community space to hold events and other native planting.

The charity also aims to capture visitors’ opinions when they visit to help determine the longer-term future of the Grade II listed structure.

Hilary McGrady, Director-General of the National Trust says: “This is a hugely significant moment in our plans for creating a unique green space to benefit the surrounding community and to bring more nature to people’s doorsteps. The project is also a fantastic way to celebrate our industrial heritage, bringing it to life for the 21st Century.

“The pandemic showed us the importance of our local parks and gardens, but it also highlighted significant inequalities in access to green space in urban areas like Manchester.

“By working with others, we aim to increase access to parks and green spaces in, around, and near urban areas, so eventually everyone is in easy reach of quiet places for reflection with wide open skies.

“We hope that ‘greening’ the viaduct will become a stepping-stone to other Manchester green spaces and nearby attractions, adding to the city’s vibrant, cultural offer.”

Costing £1.8 million, the pilot has been made possible thanks to funding raised by players of People’s Postcode Lottery, as well as public donations which will cover two-thirds of the build costs.

Laura Chow, Head of Charities at People’s Postcode Lottery, said: “Having access to green spaces and being able to connect with nature has such a huge impact on our wellbeing, so I’m delighted funding raised by our players is helping bring this to Manchester’s city centre and breathing life into this iconic piece of the city’s heritage at the same time. I’m really looking forward to seeing the project come alive in July.”

The plans for Castlefield Viaduct are part of the National Trust’s Urban Places work to increase access to parks and green spaces in, around, and near urban areas, so that more people are in easy reach of quiet places with wide open skies.

Duncan Laird, Head of Urban Places at the National Trust said: “We want to share the viaduct’s story with the people of Manchester, many of whom may already have walked the cobbles underneath this mighty metal bridge, or spotted it on the Castlefield skyline, without knowing its history.

“The viaduct has stood in Manchester for over 125 years, and we want to help the city to protect it, injecting the viaduct with a new lease of life so it becomes a space people can use and be proud of.

“We’ve already had a positive response from the communities in the surrounding area – and we want to work towards being able to deliver an exciting future for the viaduct and the residents that live close by.

“Working with partners, over the next four months we’ll be creating an exciting offer[4] for our visitors on the viaduct. We’ll be installing various garden areas which will include sensory and heritage planting as well as planting for pollinators and information on green gardening techniques. There will also be a covered event space where we’ll invite you out of the elements to discuss your thoughts for the future of the site.

“Some of the shrubs and plants we’ll be using include the cotton flower, Manchester’s County flower, and local nature friendly species which will help attract more birds and pollinators.

“By testing ideas, finding out what people really need from this unique space during the pilot we will take the learning and progress a more permanent solution for the viaduct – directly shaped by visitors and the local community.”

National Highways Historical Railway Estate director, Richard Marshall said: “We’re delighted to be working with the National Trust and other partners at this exciting stage of the Castlefield Viaduct project.

“This is the next step in creating a stunning green space that brings back to life this historic structure and brings people closer to nature in the city centre.”

The National Trust will also need to raise funds to support the future of Castlefield viaduct. To find out more about ways to support the project, contact giving@nationaltrust.org.uk

To find out more about the project, visit: www.nationaltrust.org.uk/castlefield-viaduct