You are here: Home > Manchester is one of 123 global cities named climate action leader on CDP 2022 A List 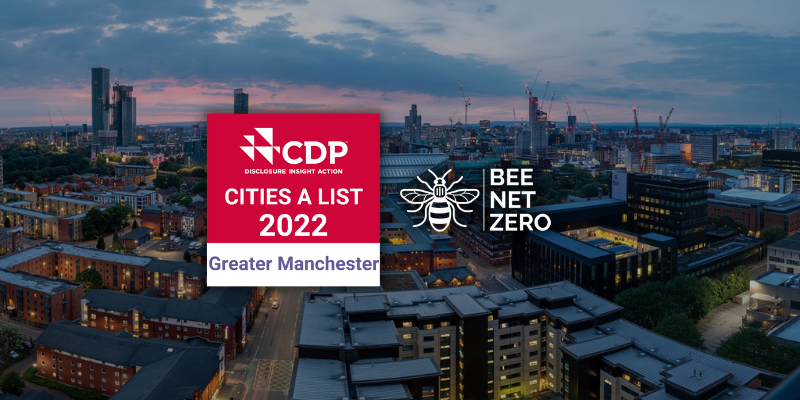 Manchester has been recognised by CDP as one of 123 cities across the globe that is taking bold leadership on environmental action and transparency, despite the pressures of a challenging global economic situation.

Greater Manchester is one of only 12% of cities globally to receive an A score from CDP, proving that the city-region is establishing itself as a trailblazer in climate action.

CDP is a not-for-profit charity that helps companies, cities, states and regions to manage their environmental impact and is seen as the gold standard of environmental reporting with the richest, most comprehensive dataset.

Being recognised in the CDP list highlights the collaborative efforts from across Greater Manchester that are working to lower carbon emissions and create a greener, fairer city-region.

To achieve an A List rating, cities must demonstrate their climate leadership through concerted and effective action, taking twice as many adaptation and mitigation methods as other cities.

As one of the first places in the UK to set a science-based target, Greater Manchester hopes to achieve carbon neutrality by 2038, 12 years ahead of the UK Government goal and the city-region is currently accelerating action to ensure this target is met. This ranking proves Greater Manchester is making progress towards its goals.

To score an A, a city must disclose publicly through CDP-ICLEI Track, have a city-wide emissions inventory and have a clear climate action plan – like Greater Manchester’s five-year environment plan which forms the basis of the region’s net zero ambitions.

Steve Connor, CEO of Creative Concern and Green Lead for GMLEP said, “Manchester spearheaded the industrial revolution and this accolade from CDP proves that the city-region is now ready to lead the green revolution.

“As an A List City, Greater Manchester is recognised for its ambition, leadership and transparency on climate action. Through collaboration, Greater Manchester has come together to develop creative solutions to the climate crisis and with our history of innovation and entrepreneurship, I’m confident we can scale up these solutions and put them into action to generate impactful results.

“Greater Manchester is now recognised as a leader in climate action, but this is just the beginning. We must acknowledge that there is more to be done if we are to meet our 2038 target and become a net-zero city.”

What actions has Greater Manchester taken to earn A List status?

Greater Manchester is working to become a greener, fairer and more prosperous city region for all residents. So far it has implemented the following initiatives and policies to encourage the decarbonisation of homes workplaces and public buildings, encourage the take up of green skills and support green innovation and investment across the city-region.

Rhys Whalley, Acting Managing Director of MIDAS, Manchester’s Inward Investment Agency said, “Greater Manchester’s 2038 target for carbon neutrality – 12 years ahead of the national target – is a major catalyst for transformation across key areas of the city’s infrastructure. This is creating a thriving environment for businesses and investors to land, grow and succeed in a wide variety of areas across smart energy, building retrofitting, green financing and beyond. Our investment in state-of-the-art facilities and nurturing a talented workforce with the skills required to support this green revolution means that the city region is well placed to continue to serve as a driver of urban-led sustainable change.”

Greater Manchester and the other 122 cities on this year’s A List are celebrated for showing that urgent and impactful climate action – from ambitious emissions reduction targets to building resilience against climate change – is achievable at a global level, and in cities with different climate realities and priorities.

The full CDP A List can be viewed here.

Learn more about Greater Manchester’s efforts to become net-zero in Future Relics, a documentary the exploring items we rely on today that won’t be around for future generations and the sustainable alternatives being created across Greater Manchester.