You are here: Home > How Manchester City Council is making its festive programme more sustainable 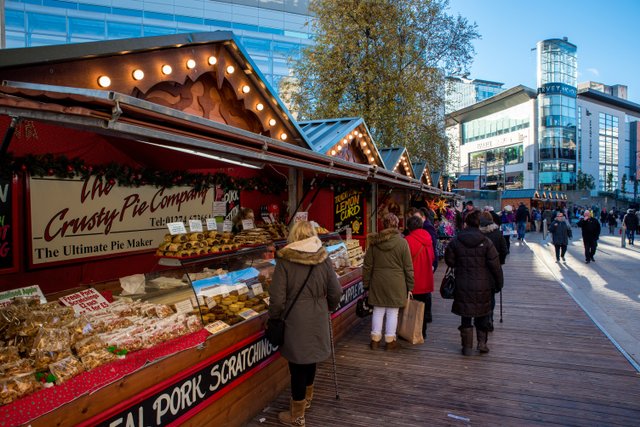 Manchester City Council has promised that this year’s festive programme will be the most environmentally sustainable yet as the city works to become carbon neutral by 2038.

New measures are in place to reduce the carbon footprint of the much-loved Christmas Markets, the city’s official decorations and other elements of the seasonal programme. These measures are built on intensive improvements over the past decade.

Manchester’s famous Christmas Markets have had a reusable glass and mug scheme in use since 2011 – savings millions of single-use plastics being thrown away every year. All single-use plastic food containers, bags, and cutlery have been banned from the markets since 2018. Where reusable plastic cups are used this year, they will be made from polypropylene, a type of plastic which takes 50% less carbon to manufacture than the previous polycarbonate cups.

The reusable cup scheme is part of a Council-wide pilot to ensure all events run by Manchester City Council use reusable cups, rather than single-use plastics and the council hopes to encourage other events across the city to follow suit.

For the first time, all electricity generated at the Manchester Christmas Markets will be powered by Biofuel rather than diesel generators, wherever possible mains power will be used to power the markets instead.

Skate Manchester, the ice rink located in Cathedral Gardens is one of only a handful of ice rinks in the UK which uses mains power to reduce the use of fossil fuels.

Christmas decorations within the market areas will remain low energy and use LED lights. For the fifth year running the lights are made from entirely biodegradable elements – including sugar cane – and are fully recyclable and compostable.

Councillor Pat Karney, Manchester City Council’s Christmas spokesperson, said:  “Like Rudolph’s nose, Manchester is a guiding light when it comes to Christmas. Not only are we Santa’s favourite festive city, we’re working on becoming one of the greenest.”

“Manchester has set an ambitious target to become zero carbon by 2038 or earlier. Achieving this will require a year-on-year reduction in carbon emissions across all fronts.

“The work to make our Christmas programme more sustainable is a shining example of what can be done.”