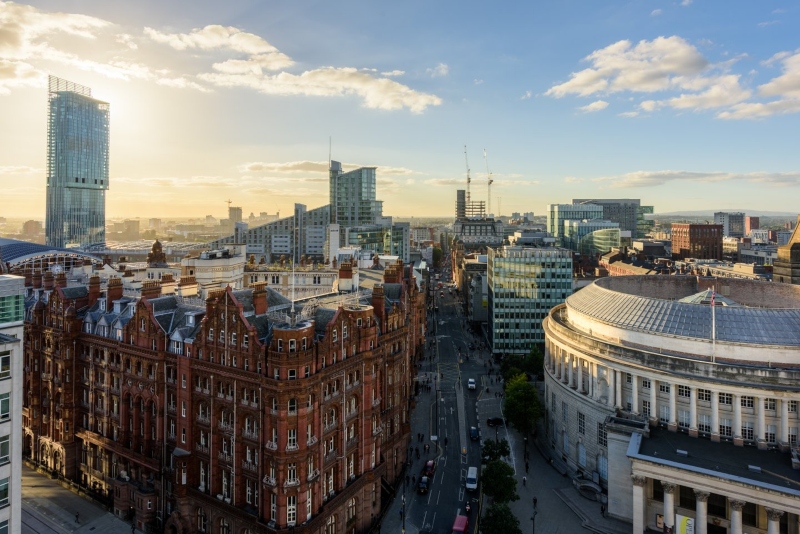 Thousands of small wind turbines will be fitted across Greater Manchester to provide more affordable energy and help the city region to reach net-zero targets.

By working alongside renewable energy manufacturers Alpha 311, Greater Manchester hopes to become home to 2,000 wind turbine units which will be powered by the air moved by passing vehicles, and placed on buildings and lampposts.

The project is a partnership between the manufacturer, Greater Manchester Combined Authority (GMCA), the Energy Innovation Agency, and the Manchester Inward Investment Agency (MIDAS).

Alpha 311 said the turbines’ size are designed to see small sites become wind farms as the units are smaller and lighter than the typical wind turbines we are used in the countryside across the UK or offshore turbines. They can be used on roads, bridges, buildings, and towers to generate energy.

Turbines of a similar size have already been installed next to the O2 Arena in London.

It’s hoped that installing the turbines across the city-region will create clean energy that can be used locally, helping meet Greater Manchester’s net-zero targets, and drive green skills in the region.

Andy Burnham, Mayor of Greater Manchester, said: “I’m delighted to see this partnership with Alpha 311 come to fruition and I’m looking forward to seeing these innovative wind turbines on Greater Manchester’s lamp posts and buildings in the near future.

“The switch to net-zero carbon can, and should, be something that offers a fairer future, as well as a greener one. Not only will this partnership see us generate more low-carbon energy locally, but it will also support the creation of 200 new jobs in Greater Manchester with green skills developed here, and – crucially – provide more affordable energy to people at a time when they need it most.”

Alpha 311 CEO and co-founder Barry Thompson, said: “We’re very excited to be working with GMCA in deploying the Alpha 311 turbines around even more of the UK.

“We’re eager to not only bring an innovative product to the region for the benefit of local communities and businesses, but we’re also excited about the potential local employment opportunities our combined projects will offer.”

David Schiele, Director for the Energy Innovation Agency, said: “Working with Alpha 311 we’ve been able to find a local solution to generating clean energy, supporting Greater Manchester’s 2038 carbon-neutral target. This collaboration shows really clearly how the Energy Innovation Agency can work with businesses to bring clean, renewable, and innovative products to market to benefit local communities. This partnership is about growth in green technologies, growth in the burgeoning green manufacturing skills sector, and above all growth in the carbon neutral economy”

Alpha 311 COO and co-founder John Sanderson said: “It’s always been our goal to empower local communities. If people live with turbines, they should not only benefit from the energy generated but also jobs and new skills they create.”

The cost of the project has not yet been revealed, however, it’s hoped that they can be installed across the region following a successful pilot in Telford later this year.

The turbines in the pilot trial will be used to power street lights, and any surplus energy will be sent back to the National Grid.