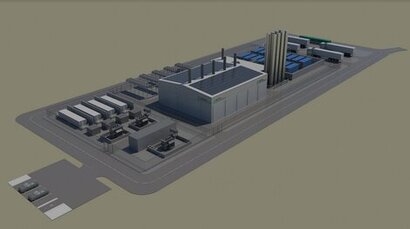 The hydrogen fuel hub will become part of the £300 million Trafford Green Hydrogen scheme which was first announced in 2021 and is set to be the largest consented green hydrogen scheme in the UK.

Gaining planning consent from Trafford Council for the fuel hub, which will be located within Carlton power’s Trafford Low Carbon Energy Park, is an important milestone in the development.

It’s hoped that the fuel hub will be a catalyst for further low carbon energy generation and energy security in the North West, boosting investment in new energy infrastructure. In a boost to the local economy, the scheme is expected to create around 200 construction jobs and 10 full-time operational jobs with future phases to be constructed in response to demand for hydrogen in the region.

The scheme’s construction and operation are dependent on receiving financial support from the Government’s Hydrogen Investment Package, a multi-million-pound programme to encourage the growth of the hydrogen economy across the UK.

It also provides an important stimulus to job creation in Greater Manchester and further investment in renewable energy generation which will, in time, provide greater energy security.

I’m delighted that Greater Manchester is in the vanguard of creating a vibrant hydrogen economy in this country, and I urge the UK Government to support this pioneering scheme.”

Carlton Power is also examining other types of energy schemes to be situated within the ca. 12-hectare Trafford Low Carbon Energy Park.

Eric Adams, Hydrogen Projects Director at Carlton Power said: “Trafford Green Hydrogen is ideally situated to provide local industry and transport operators with low-carbon hydrogen fuel. It will also stimulate investment in the region’s energy infrastructure and accelerate the region’s energy transition. The economic and environmental benefits are clear. Working with our local partners, our focus now turns towards securing the UK Government’s support to this project and our proposed green hydrogen schemes at Barrow-in-Furness in Cumbria and Langage in the South West of England.”

The proposed hydrogen hub facilities at Trafford Park, Barrow and Langage will produce and store hydrogen at scale and help integrate renewable energy on a regional scale through the storage of solar and wind energy.

If built, Trafford Green Hydrogen will be located next to one of Europe’s largest energy storage facilities based on liquid air storage: the 250MWh Carlton Highview Power project (announced in June 2020), and potentially other forms of low carbon energy infrastructure.

On July 20 2022, the Department for Business, Energy & Industrial Strategy published the next steps in its Hydrogen Investment Package and the opening of Strand 3 of the Net Zero Hydrogen Fund and Hydrogen Business Model. The Hydrogen Business Model is critical to both give investors confidence and off-takers surety on the price of hydrogen.