You are here: Home > 600 tonnes of waste removed with new Reuse shops opened in Greater Manchester 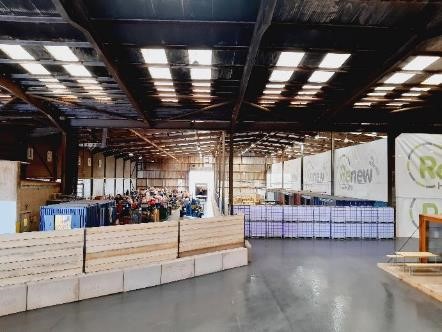 Three new ‘reuse’ shops have been opened by SUEZ recycling and recovery UK in Greater Manchester, aiming to increase reuse in a move towards a circular economy.

The shops will take items collected at 15 Household Waste Recycle Centres across the region that have been donated by residents – where they will be repaired and cleaned if necessary and then sold back to the public.

Based on items donated so far, it is estimated at least 600 tonnes of waste will be diverted into reuse in the first year of operation through the three Renew Shops.

SUEZ are also opening a new reuse Hub in Trafford, which will house repair pods to repair and upcycle unwanted items, as well as offering space to community, professional and educational groups for training and workshops.

The project is aiming to train people in green skills offer items to those in need, and provide support to Greater Manchester residents in a transition towards a circular economy, reducing carbon emissions.

The shops and Hub have so far resulted in the creation of 10 new green skilled jobs, with more to come.

John Wrigley, Regional Director for SUEZ recycling and recovery UK, said: “What if as a society we wasted less, reused more, and gave items a second lease of life leading to less manufacturing of new products and a more circular economy? That is what we’re bringing on an industrial scale to Greater Manchester.

“We already have partnerships in place with like-minded businesses such as Recycling Lives, who support people from prison to learn new skills and reduce reoffending, focused on WEEE products, and Touchwood, who collect and repurpose redundant wood.

“The possibilities are endless and focus around delivering real social, economic and environmental value for Greater Manchester. “

The Reuse Hub and shops are a partnership between SUEZ, who manage the waste contracts on behalf of GMCA, and GMCA.